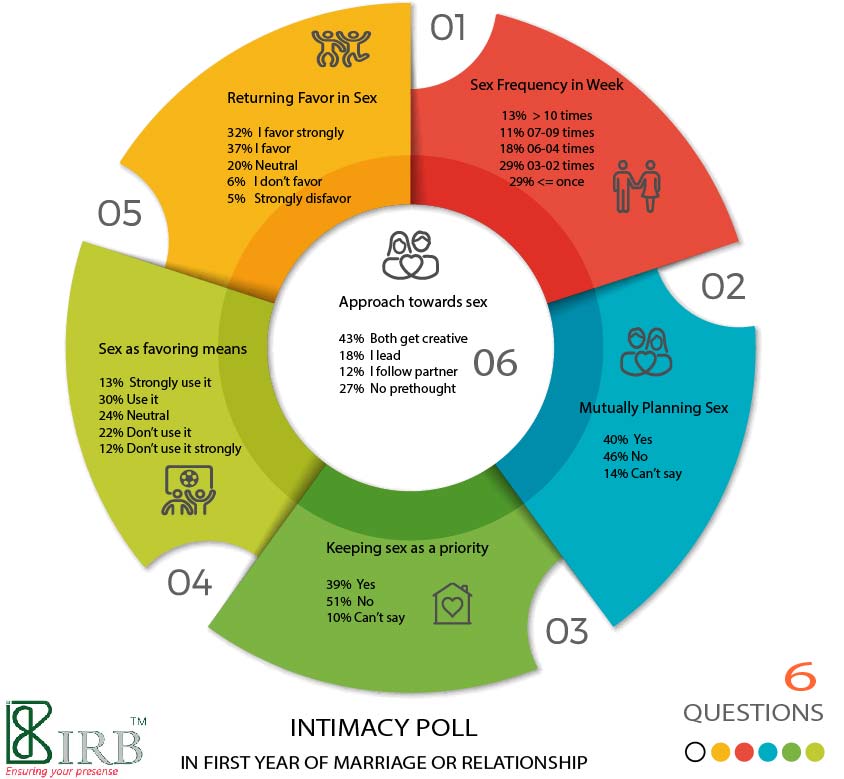 Intimacy Poll: Breaking The Barrier Between The Sheet

Breaking The Barrier Between The Sheet

To understand the changing dynamism between men and women the relationship especially in the first year of marriage or courtship or relationship, we conducted a series of poll to understand the intimacy. The responses show the transition of the couple from inhibition to experimentation and exploration. We asked about the sex frequency in a week and for the majority for 29% of the participant the frequency was and every is 2 to 3 times a week. 18% of the respondents had sex between 4 to 6 times a week. 11% mated between 7 to 9 times a week while only 13% enjoyed it more and had made love more than ten times a week. The message for the majority that is 47% of the participant the frequency was an average 2 to 3 times or less than that in a week.

More of ecstasy, less of monotony

Sex is important but not a big priority

Using sex as a favoring means

These responses are reflective of the sentiments of the newly married couple. It primarily reflects the views of respondents from metros and dear to cities. The age of these participants was between 25 to 35. With these questionnaires asked on its consumer community, Opinion Bureau, IRB is offering a platform to the respondents to voice their opinion and reflect their lifestyle in the most organic and safe environment where they can express their opinion without any bias or prejudice that too from the comfort of their home.

The poll outcome is very much correlates with the insight I have from the interaction with my clients. Due to the hectic schedule and tough life style of the city dwellers, people even the newly wed don’t get sufficient time to sexually connect. However, in the early years, the involvement of both the partners is more or less the same and they also are vocal about sharing their needs and wants with their partner.

Couple’s willingness to experiment and openness to return the favor, especially in early years is rightly captured. It is also no surprise that people use sex to compensate for the mistake.

Vijaya Darade is a certified sex counselor and educator who has been helping couples and individuals in dealing with their sexual intimacy and associated psychological problems. A certified trainer from Tata Institute of Social Studies sponsored, Comprehensive Sexuality Educator, she is also certified and trained under India’s leading sexologist Dr. Rajan Bhonsle.

We are thankful to her for framing these questions and also sharing her insight on the poll outcome.

A Partner to Help You

Regardless of the pros, we understand you may not know where to start, or how to ensure a smooth transition to online research. As an experienced online research panel company, we can help.  We’ve always been 100% digital and are equipped with the technology and methods to make sure there’s no functional or operational disruption of your research. What’s more, we also offer support services such as survey programming, hosting and data collection with a team of experts here to guide you throughout the process.

We are committed to helping businesses like yours in these challenging times. For more information, contact IRB today.